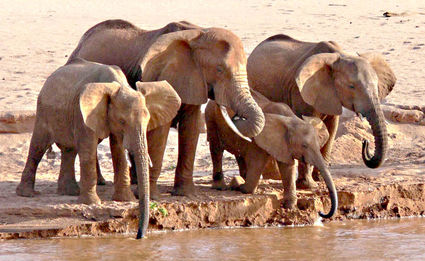 Elephants are the largest land animals on Earth and are also known to be extremely intelligent. They have characteristic long noses, or trunks; large, floppy ears; and wide, thick legs. A group of elephants is called a herd. The herd is led by a matriarch, which is the oldest female. Females, as well as young and old elephants, stick together in a herd. Adult males tend to wander. Elephants also have certain rules. For example, when they are meeting each other, they expect the other elephant to extend its trunk in greeting. The matriarch will often teach young elephants in her herd how to act properly.

Male elephants are called bulls and females are called cows. After mating, the cow will be pregnant for around 22 months. When the baby elephant is finally born, it can weigh around 200 lbs and stand about 3 feet tall. A baby elephant is called a calf. As the calf grows, it will gain 2 to 3 lbs. every day until its first birthday. By the time they are 2 or 3 years old, calves are ready to be weaned. Male calves will wander off on their own, while females will stay with their mothers. When they are 13 to 20 years old, they will be mature enough to have their own young. Elephants live 30 to70 years in the wild. Those elephants that do have a good environment to live in can do so for 50 to 70 years. Many of the very old elephants die due to their teeth grinding away over the years. Then they starve to death as they aren't able to chew food anymore.

Elephants are known to form very strong emotional bonds. They are excellent with their offspring and they seem to get along in their herds for the most part. They have been seen displaying signs of distress and sorrow when one in their herd is injured or that it has died. The typical size of a herd is about 20. Elephants are in danger though of surviving in the wild due to the destruction of their natural habitat. This is a major concern as we don't want to see these wonderful creatures being destroyed. Many of them live in zoos or they are part of circus acts. Since they are gentle for the most part, smart, and can move heavy items you will often find elephants helping to put up the tent at the circus. They are also used in many countries to carry logs and other heavy items.

There are two species of elephants remaining in the world – the African and the Asian. They range in color from light to dark gray, with the most distinct features being their huge ears and tusks. These tusks though have resulted in the deaths of thousands of elephants though. That is because they are made from ivory. Even though it is now illegal to trade or sell ivory it continues to be profitable on the black market. These beautiful majestic animals are a family for life, they never leave each other. It is our responsibility to protect the animals. Elephants are being poached for their tusks illegally we must do something to stop this, studies show in 10 years they will be extinct because of man.