Mooring the Ship of State 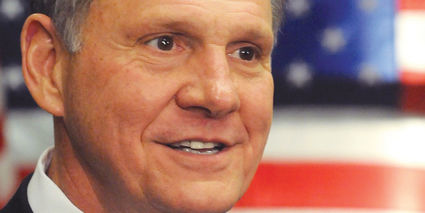 Judge Roy Moore's victory over Senator Luther Strange was no surprise to 63 of 67 counties in Alabama.

It mirrored the initial primary election a few weeks earlier but for the Mo Brooks shift. The $30 million spent from the Republican establishment PACS proved no match for a campaign based on prayers and a passion for the principles of God and country.

To be sure, Judge Moore evokes strong emotions from whichever political corner you are in. As a Constitutionalist, Moore narrowly interprets it based on its clear and unambiguous meaning which the Left decries as unfeeling and out of step with its mainstream. While Strange touted his NRA endorsement in commercials, Moore toted his 38 revolver on stage as permitted under our Constitution.

During the debate Strange spoke, no less than 38 times, of his allegiance, friendship and unequivocal support from a President he had met only a few months prior. Moore spoke of God. Strong negative ads from the Republican PACS filled the airwaves for weeks while Moore and his wife strolled through a veteran's cemetery with American flags waiving as they walked by. Strange carried the political baggage of a career lobbyist. Moore carried a Bible and two "Biblical" impeachments . Senator Strange's suspect appointment from a disgraced Governor

(Attorney General Strange's office had prosecutorial authority over the wrongdoing) combined with a slap on the wrist punishment did not pass the smell test for most Alabamians.

Senator Luther Strange is a good man. He got played by powers far removed from the corn fields and choir lofts that cover Alabama. He is a conservative. He is a Christian. Had he not taken the appointment and completed his constitutional duties as required, the results may have been very different.

However, this election reached well beyond the geographical border of our state. Many Liberal pundits gleefully interpreted Moore's election as a loss for President Trump. However, it was just the opposite.

This fundamentalist Senator will side with Trump practically 100% of the time. This election sent a strong signal to sitting establishment Republicans Senators that Trump's vision of America is rooting and they must either amend their position or face defeat in the next election cycle. Senator Bob Corker of Tennessee has seen the writing on the wall and is the latest Senator to announce he has decided not to run for reelection in part due to his unwillingness to support Trump. More will follow.

Moore's success in the primary runoff will translate to a solid victory in the general election December 12th.

The Democratic opponent, Doug Jones, is a Clinton appointee, who in 1998 successfully prosecuted members of the Ku Klux Klan for the 1963 Birmingham church bombing that killed four young girls. Jones has already attracted

national attention. Both the New York Times and The Washington Post recently encouraged readers and contributors to consider getting involved in a race where Jones might actually have a chance to pick up a Democratic Senate seat in the "Deep South".

To avoid such a scenario, it will not be surprising if President Trump once again returns to Alabama to campaign for the Republican candidate.

Trump and Moore have common bonds. Both attended military school (Moore is a graduate of West Point and Vietnam veteran), both are rugged individualists, both have their own firebrand style of leadership and both have a vision for a better America based on faith, a strong military, solid economic growth and traditional family values. Prediction: Moore 59% Jones 41%.