It's the season for Prescribed fire! 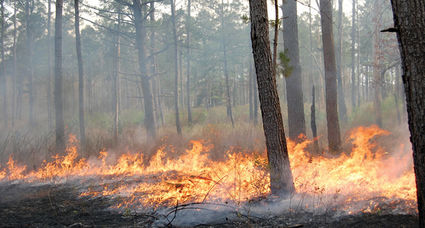 Well, we finally made it to the month of February and we only have 6 days left in deer Season. But in February in Alabama another subject comes to my mind and that is the subject of Prescribe Burning. The following article is from one of the premier land managers in our state, Mr. Ted DeVos Of Bach and DeVos Forestry and Wildlife Services.

Images and thoughts of woodland fire are typically that it is bad! However, this is probably because most people are not familiar with the benefits of burning and have not taken the time to study prescribed burning and the ecology of their natural resources. Fire is as natural as rain and sunshine. It was always a part of the natural ecology of our landscape.

The difference in wildfires and prescribed fires is that wildfires often burn huge acreages, typically in dry times of year and can be uncontrolled, destroying trees, houses, crossing roads, etc. Prescribed fires, on the other hand, remove the same fuels that wildfires need but are done in a controlled manner with firelanes to contain the fire and in conditions that keep the fire low to the ground only burning the grasses and debris on the ground.

Prescribed fire is one of the most useful yet misunderstood and under-utilized tools in the land manager toolbox. While there has been some increase in the use of fire in woodlands in the last decade (over 1 million acres in Alabama in 2009), there are many more millions of acres that need burning and are not getting it.

In the deep southeast, fire has been an integral part of the evolution of our woodlands. Most of this area was forested in Longleaf pine and, historically, a burn interval of 2-5 years was the norm. Lightning or native American set fires burned vast acreages and the habitat it created was described by early explorers as "a vast forest of the most stately pine trees that can be imagined” and "passing through a level, open, airy pine forest, the stately trees scatteringly planted by nature, arising straight and erect from the green carpet, embellished with various grasses and flowering plants". Many people think old-growth hardwood forests of oak, beech and chestnut were the natural pre-settlement condition of the southeast, but regularly burned pines were covering most of Alabama. These early Alabama explorers also described abundant wildlife populations of deer, turkeys, bear, panthers, bison, elk, pigeons, etc. all dependant on the fire-maintained woodlands of the southeast. Needless to say, fire was and is an important driving force in our woodlands.

Today, we burn mostly to maintain wildlife habitat, manage timberland and try to prevent wildfires. The benefits of regular woodland burning include reducing hazardous fuel buildup that leads to wildfires, increasing aesthetic values and promote wildflower production, encourage a more sunny understory that grows more grasses and weeds providing food for all wildlife species, and help control some insects and diseases. Most species of wildlife in Alabama are benefitted significantly from regular burning.

While wildfires in the western states are usually seen on the evening news, southeastern wildfires can also be large and destroy many homes and businesses. Wildfires in Georgia and Florida are common, especially in dry years and can burn vast amounts of acres. The fires in Gatlinburg in the fall of 2016 are an excellent example of the lack of prescribed burning allowing massive fuel buildup to spark one of the worst natural disasters to hit Tennessee. This fire burned 16,000 acres and killed 14 people plus destroyed around 2,000 structures in and around Pigeon Forge and Gatlinburg.

The traditional time for woodland burning in the southeast is from February – April. This is a time of drier fuels and lower humidity that are conducive to good burning. Some burning is also done from late spring through summer.

If you do your own burning, smoke management is a major concern on all burns and knowing what your smoke is expected to do and where it will go is also important in planning the burn. Knowing where any housing developments, urban areas, airports, schools, hospitals, roads or other smoke-sensitive areas requires planning for wind directions and smoke dispersion levels for your burn area. For instance, if you have a road bordering your burn unit on the west and north side, you will need a north and west wind to move smoke away from this hazard.

Typically, prescribed burners in Alabama are trained as Prescribed Burn Managers through the Alabama Forestry Commission. Most have been burning the woods a long time and have the experience it takes to keep fires contained and minimize disturbance to surrounding landowners. All fires less than ¼ acre in Alabama are required to have a burn permit issued by the Forestry Commission.

A variety of resources are available for those interested in prescribed burning. Websites like the Alabama Prescribed Fire Council (http://alpfc.org/), the Alabama Forestry Commission (http://www.forestry.state.al.us/), and the Southern Fire Exchange (http://southernfireexchange.org/) discuss the benefits of burning and techniques to conduct burn. At sites like these, you can get fire weather forecasts, drought conditions, smoke planning tools, Prescribed Burn Manager training and burn permits among other information.

So, if you see a smoke plume off in the distance, smell smoke in your neighborhood or see a burn near a road you are travelling, remember that these prescribed fires are good for the environment and may actually prevent a wildfire from happening near you!