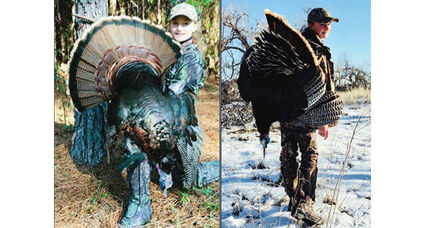 Since the dust has settled from this turkey season, I want to tell the amazing story of an accomplished young turkey hunter. Her name is Mari Grace Brooks from Grady Alabama, and she is 13 years old.

Mari Grace successfully completed the double Grand Slam in a single season. This is totally unheard of and possibly the first 13-year-old female ever do such an unimaginable task in one year. Honestly, I know only a handful of grown men that it took a life time of hunting to accomplish one Grand Slam much less a double Grand Slam in the same year. (A Grand Slam is bagging each species of turkey, the Eastern, the Osceola in Florida, the Rio in the Southwest and the Merriam in the upper Mid-west)

I have known her father Robby for many years dating back to our high school days at Jeff Davis. He enjoys spending time on his farm raising cattle, gators and especially turkey hunting with his daughter, Mari Grace. Robby also owns the Ramer Café with his wife Melanie. The café specializes in home cooked country meals and a mighty good hamburger.

Mari Grace has been turkey hunting since she was 4 years old and killed her first turkey at 4 with a single shot 410 shotgun. All total she has killed 45 turkeys in several different states. This year she bagged 10 birds in 4 states.

Their goal this turkey season was to attempt the Grand Slam regardless of weather conditions. In fact, she hunted in temperatures ranging from 9 degrees in the Black Hills of South Dakota to 89 degrees near Laredo Texas. They also traveled to south Florida twice to hunt the most coveted turkey in my opinion, the Osceola.

Mari Grace’s first hunt this year was during the Florida youth season on February 24th where she bagged a big bird with hooking spurs (limb hanger) south of Lake Okeechobee. The bird had spurs 1 ¾ inch! She shot her 2nd Osceola on April 20th. When asked where her favorite place is to turkey hunt, she replied that it was on her family farm in Grady, Alabama hunting the Eastern turkey.

She said that the Eastern is more of a challenge than all the other birds. She also enjoys traveling to the other states with her father. They are making memories that will last her a life time.

On March 31st she had her eye on a big bird on their farm. Unfortunately, that turkey never gobbled that morning making him extremely difficult to hunt. The very next morning on April 1st he gobbled 60 times and she shot him at 22 yards with her 20-gauge Tristar shotgun. He was a whopper of a bird and she was very excited that she bagged him.

Mari Grace is a dedicated turkey hunter and loves wearing her SHE camo! She fully understands that our turkey population is on the decline and believes that if more people would trap predators such as raccoons, coyotes, possums and hogs that the turkey population would rebound and make a come back. The Brooks set traps on their farm for predators and wish more people would do the same. She has a life time hunting and fishing license and is certainly getting her monies worth. She is a true believer in Game Checking her harvest.

In closing, if more fathers were like Robby and spent the amount of quality time making memories as he does with his daughter, the world would be a better place.

Congratulations Mari Grace Brooks and keep up the good work!