A DoDEA Americas School Selected as a 2019 Blue Ribbon School 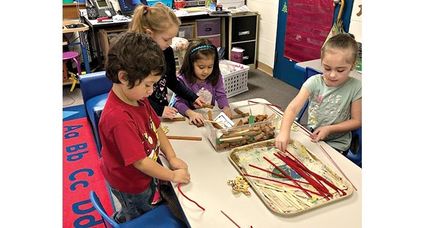 PEACHTREE CITY, GEORGIA - A Department of

was recognized recently by U.S. Secretary of Education

Air Force Base in Montgomery, Alabama is one of the

nation, and one of the three DoDEA schools recognized.

The award is based on the school's overall academic

excellence or their progress in closing achievement gaps

"I am extremely proud of the hard work and dedication

of the leadership, teachers, and staff to exemplify the

DoDEA mission of excellence in education for every

National Blue Ribbon Schools are recognized in one of

two performance categories, based on all student scores,

* Exemplary High Performing Schools are among their state's highest performing

schools as measured by state assessments or nationally normed tests.

* Exemplary Achievement Gap Closing Schools are among their state's highest

performing schools in closing achievement gaps between a school's subgroups

and all students over the past five years.

Maxwell AFB Elementary/Middle School was established in 1963 in Montgomery,

Alabama. Since its inception, the school has provided a superior

education for pre-Kindergarten through fifth-grade children of United States

through eighth grade, was added in July 2011.

standards or are making notable improvements in closing the achievement gap.

This coveted award affirms the hard work of educators, families and communities

in creating safe and welcoming schools where students master challenging

building is a widely recognized symbol of exemplary teaching and learning.

striving for excellence. A total of 362 schools were recognized this year.

Now in its 37th year, the National Blue Ribbon Schools Program has bestowed

Secretary and the Department of Education will celebrate with these honorees

at an awards ceremony in Washington, D.C.

grade education programs for school-age children of Department of Defense

personnel who would otherwise not have access to high-quality public

education. DoDEA schools are located in Europe, the Pacific, Western Asia, the