From Pig Skins to Rawhides 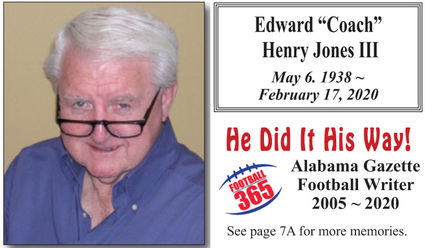 My Mentor, Ed Jones, was a great encourager. In the past weeks, he asked me to write a piece or two for him. What an Honor. He, in his affable manner said; "I'm a football guy, but you write whatever you want to write about." I'll sure miss him.

All the football games have been settled, at least for last year. And the Daytona Five Hundred has been run, now it's time to focus on America's Favorite Past Time; Baseball.

I wonder and worry about the game today. It's hard to follow until the season gets almost to the All Star break. By then I can finally manage to figure out who's where, with trades, free agency and suspensions, who can follow it. So by the break I begin to enjoy the game again. The caveat being, I must watch the Opening Day Games. I have to admit, I sure enjoyed the Major League Network this season past.

I have so many great baseball memories.

Some of you will remember listening to the St Louis Cardinals on AM radio. There were many Cardinal fans in the South. Primarily speaking, that was the only baseball we could get. Dizzy Dean, Stan Musial and Joe Garagiola to name a few. My Dad and Grandad were Cardinals fan. While my dad always denied it; I think I'm named after Musial.

Those of my generation grew up watching and more importantly, playing baseball. My grandad Taylor, born in 1900 introduced me to the game as a youngster. He played as a youngster and as young man. For his generation it wasn't the score that actually decided the game, rather which team won the fight after. The most shocking of many stories my grandfather shared was during the normal fight following one of his games a kid on the other team broke proper decorum and pulled a switchblade knife on my grandfather, to which he promptly responded my knocking the knife out of his with a baseball bat. Well it broke his wrist; but that's baseball back in the day.

I grew up in Jacksonville Florida and in the early sixties we got our third TV station; ABC. They carried the Pirates games and the Braves games in the afternoons. We were big Pirates fans, as a middle infielder myself, I loved Gene Alley and Bill Mazeroski. Gene Alley playing short stop and Mazeroski at second, they could turn a double play like nobodies business. I must have chewed a five gallon pail of bubble gum to finally get both of their baseball cards. By the time I was old enough to go to the minor teams games in Jacksonville, they were the triple A Suns, a Mets affiliate. When my grandfather Taylor was my age, they were the Jacksonville Tars.

So much of my time growing up was with my grandfather. Watching baseball, talking baseball and practicing hitting, throwing and catching. He had such great experiences and stories. While my baseball coaches taught me the fundamentals with endless drills in practice, my grandfather taught me more. He taught me the thinking part of the game, how to be mentally tough, to move on to the next play if I made a mistake, leaning into pitch and getting thunked was as good as a hit. My grandfather taught me life lessons through baseball. That's truly what baseball used to be, and still is to a lesser degree; learning lessons. Overcoming adversity and relying on your team mates to pick you up. We spent our times together, with him teaching me and telling me about watching Babe Ruth play, and so many anecdotal stories about the Babe, Carl Hubbell, Joe DiMaggio. And we watched so many great players, Willie Mays, Roberto Clemente Hank Aaron, Bob Gibson and occasionally if we were really lucky, we got to see Sandy Koufax pitch.

Sandy Koufax, what a great story.

Koufax pitched in high school but primarily was a basketball player. When it was time for college Koufax was a walk on for the basketball team at Cincinnati. The real reason is that he knew the basketball team traveled and he thought it would be a great way to meet more girls. While he did pitch at Cincinnati it was one season only. In his only season, Koufax went 3–1 with a 2.81 ERA, 51 strikeouts and 30 walks in 32 innings. Bill Zinser with the Dodgers originally scouted him and recommended the Dodgers sign him. Well that scouting report was somehow got lost and it was not until Al Campanis had him work out in the gym at Lafayette University did the Dodgers come running to sign him. Campanis reported to Walter Alston the manager of the Dodgers that he had caught "lightning in a bottle" and that they better sign Koufax as soon as possible. He had a very impressive career, shortened by arthritis in his left elbow. Koufax retired at 30 years old. There are so many Koufax stories, one of my favorites is this one. When asked in a post game press conference a reporter asked gregariously; "Sandy, what was your best pitch tonight, the curve ball or the fast ball?" To which Koufax quickly replied; "neither, it's the one I threw behind the first batters head!"

My all time favorite pitcher is Bob Gibson.

With a lifetime 2.91 ERA, 251 wins and a whopping 3117 strikeouts. Gibson lead the Cards to victory in the 1967 World Series, winning all three appearances including winning game seven. Now this is pure baseball lore, but I hold it to be true. After the 1967 World Series the Major Leagues lowered the pitchers mound from 15 to 10 inches. Why? Bob Gibson! well that's the tale and I'm convinced it's true. The best Bob Gibson story must be the mound visit by Tim McCarver. "Red" Schoendienst, the Cardinals Manger signaled for McCarver to make a mound visit. As soon as McCarver arrived Gibson told him, before he could say a word; "What are you doing out here? The only thing you know about pitching is that it's hard to hit. Now get back behind the plate, and don't come out here again."

For Gibson, baseball was not a game, it was war!

The 2020 Season is upon us, all players were to report for spring training February 17th. The Grape Fruit League has already played a couple of times.

I don't feel the same way about baseball as I did while a kid and a young man. The 1968 Tigers, Micky Lolich and Denny McClain; champions. Remember the Oakland A's dominance in the early 1970's. They won three straight World Series 1972, 73, 74. Now after the baseball strike, the "juicing" players used to cheat their way to stats and records, I'm not the fan I once was. I'm also not so much a fan of the analysis into paralysis that over shadows the games today. It takes away the mystery and mystic of the game.

Watching games in the present brings back the memories of the past. These memories are a sort of anesthetic that allows me to still see as many games a possible. For the most part the corporate ownership of teams is far too much about making a buck. Baseball is not entertainment as hard as they are trying to make it so. Baseball is purely a game to be digested and enjoyed. To conjure over and argue over.

Sandy Koufax said, "The game has a cleanness. If you do a good job, the numbers say so. You don't have to ask anyone or play politics. You don't have to wait for the reviews." That's still true today, just peel the onion enough and you'll find it.