Purple Pinkie Day: Give the Finger to Polio! 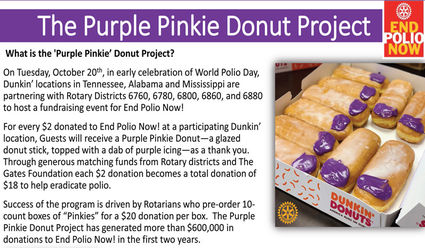 The latest edition of the Montgomery County Historical Society magazine, The Herald, highlight's a 1953 LIFE Magazine article describing the dire situation our nation faced with a different deadly virus, polio.

The article focused on the inoculation that took place in Montgomery for 33,000 children receiving gamma globulin as a preventive to limit paralysis in an epidemic that struck down 85 children by week's end in the City.

Thanks to Dr Jonas Salk, an immunization was discovered in 1955 that would prevent polio around the world. No patent was taken so the cost of making the vaccine is very small. Fast forward 70 years, the world went from over 120 countries with over 350,0000 polio cases annually then, to now only two countries, Afghanistan and Pakistan as harboring this dread virus. But, until the virus is completely removed from the earth, it poses a constant threat to the lives of children everywhere. You might recall, President Franklin D. Roosevelt contracted polio as well as many other famous people, including the late Jack Nicholas.

A great deal of credit for the reduction in cases goes to Rotary International, which adopted the goal of complete polio eradication. Every year on October 24, Salk's birthday, Rotary celebrates World Polio Day by raising awareness and funds to help pay for immunizations around the world from the U.S. to Mexico to Africa to India and all parts in between. In developing countries, like India, children receive the polio drops between age 6 months and 6 years. Once received, the child dips his or her pinky into a purple inkwell to display they have received the immunization.

This year, Alabama joins the state of Tennessee in promoting Purple Pinky Donut Day because of the gracious acts of a Rotarian in Knoxville. Dave Baumgartner owns Dunkin Donut franchises in Tennessee. Rotary Dave generously donates, free of charge, donuts for Rotary to sell with ALL proceeds going to the Rotary Foundation to Eradicate Polio. But, there is more because for every dollar spent it has a $9.00 multiplier.

In other words a box of purple pinky donuts costs $20. But, through matching donations from the Bill and Melinda Gates Foundation and others, the donation turns into $180! With the manufacture cost of the vaccine only about a dime per dose, your gift can help immunize over 1,800 children!

Last year the Purple Pinky Day project donated $500,000 to the Rotary Foundation because of the generosity of people who want to make a difference in the world and maybe even have a sweet tooth. The boxes can be shared with people at work, your Sunday school class, first responders and even local classrooms, you name it!

Again thanks to Dunkin Donuts for the sponsorship of this great effort to STOP POLIO NOW!