Rush a Man Way Ahead of His Time 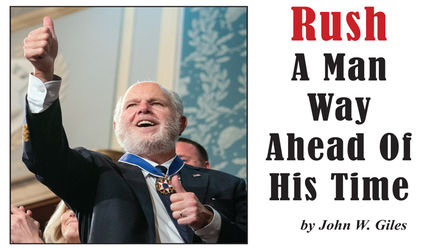 In 1987, I sold my portion of Giles Enterprises and did a little real estate development in 1988 and in 1989 joined the Hunt Administration as Small Business Advocate for the State of Alabama. Also in 1988, on a scratchy low powered AM radio station in Montgomery, Alabama, a strange, but different kind of radio talk show was launched, “The Rush Limbaugh Show.” I was 34 then, and now 31 years later, I am 65 and still mesmerized by the depth, insight, revelation and the almost prophetic sense Rush has on current affairs and public policy issues.

I smile thinking back on the intro song, when a base guitar and drums start up and what sounds like a little off key lead guitar pitching in with what became then and still today the Rush Limbaugh theme song. His lofty tone of being on loan by God and having half of his brain tied around behind his back made us all smile as this trademark became the template for news talk radio. Out of thin air, he created this notion of Excellence In Broadcasting (EIB), which further etched his brand into the American political architecture. He was trademarked for shuffling papers as he articulately made clear his precise points. My fellow Republicans, tradesmen on the job site of our real estate endeavors and friends in church were all quoting Rush like one would quote scripture. He was a modern day conservative authority figure.

Mind you, in 1988 there was no public internet, let alone social media. Talk radio became the gateway for the average citizen to get well acquainted, educated, and armed with facts on current affairs. This forum exponentially shaped the economic, social, moral and constitutional conservative mindset in this country. Following Rush, the Apostle of News Talk Radio, he led the way for other shows to begin springing up across the nation. However, Air America, a nationally syndicated radio network was set up to carry the liberal talk show hosts, failed after six struggling years. Fast forward to 1994, Rush’s audience and other talk radio audiences were exponentially growing, and still there was very little internet access except through AOL, do you remember that? Newt Gingrich led the GOP with the “Contract with America.” Rush and the newbies of talk radio were pounding this daily, the result, we historically swept the US House into a GOP controlled body, which was the first time in 40 years. Rush Limbaugh and this emerging generation of conservative news talk show hosts were shaping minds of all ages and arming them with facts, which makes a lethal body politic from those politicians wanting to hide from their record and the facts surrounding any one given issue.

Governor James who I had a great honor and pleasure of serving in his administration always told me this, “Giles, if you give the people ALL of the facts, they make sound, rational and right decisions,” The key word is ALL the facts. Rush Limbaugh led a coalition of talk radio hosts across the country that made it their daily job to educate voters and arm them with ALL the facts. Rush has a gifted way of getting to the root of an issue, and in an almost prophetic manner, accurately forecast the optics, messaging and outcomes over any one given issue. Like a bird dog pointing a covey of quail, Rush has a 100% accurate sixth sense about him and like an old yard dog, would grip it in his teeth and not let go.

Rush Limbaugh un-mistakenly is the Patriarch of Conservative News Talk Radio. He has been a consistent economic, social, moral and constitutional conservative for decades. The average person on the street today, with the internet and voices like Rush Limbaugh have become a very knowledgeable educated electorate. Tuesday night, at the State of the Union Speech, President Trump recognized Limbaugh with the Presidential Medal of Freedom, the highest civilian award and was presented live in the gallery by First Lady Melanie Trump.

Monday, February 3rd, Rush broke the news to the world that he was in hand to hand combat with Stage 4 Lung Cancer. Stage 4 cancer generally is conclusive news, but we are all praying for a healing to take place. Rush is irreplaceable, it will take ten men to fill these shoes. Like the woman healed of the issue of blood by touching the hem of Jesus' garment, we ask the Great Physician to touch Rush in the same way.

I have often quoted George William Childs before, but he once said, “I would rather have a plain coffin without a flower, a funeral without a eulogy, than a life without the sweetness of love and sympathy. Let us learn to anoint our friends beforehand, before their burial, post-mortem kindness does not cheer the burdened spirit and flowers on a coffin cast no fragrance backward over the weary way.”

Rush, we are all praying for you to defeat this battle with lung cancer, fully recover and return to your appointed post each day for the American people.

In the event, God is ready for you to make that final journey and exchange the temporal for the eternal, we all want to anoint you beforehand as Childs admonishes us to do. You are on our daily prayer list and you will forever be the most anointed renowned Patriarch in your field.

History will kindly showcase you as a profound man ahead of your time.

It is true; Rush Limbaugh is on loan to us by God.