Tears & Laughter - The Good Times of an Alabama Summer 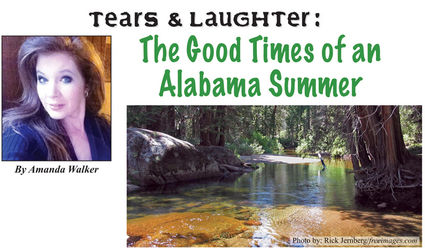 Summer means different things to different people. To some it probably means nothing more than long days and hot nights. Unless you are a fan of the two…which I happen to be. I’m not sure anymore if I like summer because of the season itself, or if it has more to do with the state of mind.

Or maybe it’s just the memories.

In Alabama, summer is not defined so tightly by the calendar and temperature as it is activities. School being out adds more freedom for some – for teachers, and students, and homeschool mothers – who are particularly giddy this time of year. This marks my sixteenth summer as a homeschool mom, and it will be my final. I clap my hands every time I think about it.

My 17-year-old thinks this summer will be the best summer ever. She can list the reasons – she is older, she can drive, and she is now officially a senior. I have tried to assure her this won’t be her last good summer.

The summer I was 17, my best friend’s dad bought her a red Trans Am. I think it was as much for him as for her. It was the car he had wanted when he was young. He got as much joy out of giving it to her as she did receiving it.

We drove to the beach in search of the boys of summer, singing along with the Beach Boys to “Kokomo.” We would play it, rewind it, and play it again. That was our plan, to get there fast and then to take it slow. It was a good plan, but it went so fast it was a blur. A lot like life itself I suppose.

Besides, if I had spent my summers at the country club I would have missed out on the thrill of searching for swimming holes. Some of the very best days of summer were spent in search of creeks and streams hardly deep enough to wade through. And there were two types – the phantom and the real. There wasn’t a whole lot of water in Sandflat. We were not a river community, and we were 150 miles from the coast.

A phantom swimming hole was one somebody had heard about but wasn’t exactly sure how to get to or find. It was kind of like being in search of Eldorado. But since part of the fun was getting ready and the anticipation of going, it was still a good time. We would spend a couple of hours gathering things we would need – like towels, fishing poles, and Kook-Aid in Mason jars. Somebody would usually take a machete – to cut a way in, and also to use for snakes, potentially. Then we would spend the rest of the time searching for a place that didn’t seem to exist. Or we would find it, but when we would finally get to it, the water would be so shallow it hardly flowed.

Then there were other days, when somebody’s mama would suggest going to the creek. These, were the sacred mothers of summer. The ones who thought to pack a watermelon in an ice chest. Brave enough to drive a carload of us swimming. It was a time before swimming pools dotted backyards across the landscape. It was another time. It was … a good time.