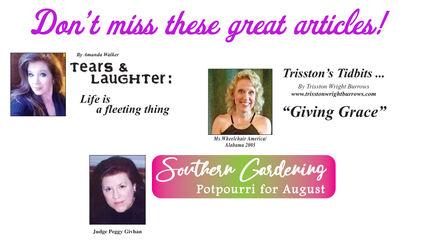 There are voices in other rooms tonight. Soft voices. Young voices. Granddaughters’ voices.

Their brother – the baby – is asleep in an adjoining room. We were all worried if he could sleep, or would sleep. This is his first night ever away from his mama…and when you are one, being away from your mama is a big deal.

His being the baby is about to change. He will have relinquished the title and become a big brother before daybreak.

He doesn’t know. He will never remember a time before her. He is too little to know. We’ve told him, but he has no awareness of what we mean yet. But by the time I finish writing this column, his new little sister will have entered our world. Welcome…Meredith Pearl.

Meredith had been scheduled to arrive today via a preplanned induction starting last night. But her induction was bumped from the hospital’s schedule yesterday due to another medically necessary induction. She was sent home, and has now gone into full labor naturally.

So rather than things going smoothly as planned for all of these months, they made the 90 mile trip to the hospital tonight with her husband driving like a bat out of hell, hoping Meredith wasn’t already sitting in the truck with them upon arrival.

That can happen you know. My sister-in-law Jamella – who was named after Alabama Governor James E. “Big Jim” Folsom’s wife Jamelle – had her youngest son out in the hospital parking lot. It made the front page of Andalusia newspaper and gave my nephew quite the colorful memory to share. He was in the backseat.

For Meredith’s delivery, because of COVID restrictions, it had already been decided that it would be the other grandmother’s turn to attend this time. I agreed to keep the little ones tonight, and tomorrow we will switch.

I am getting texts and pictures and things are getting pretty active over at Baptist East at the moment. We are all texting – her, me, her sister, her other sister, her great- grandmother – sharing progress, encouragement, excitement, and joy.

Meredith, will make my seventh grandchild. She breaks the tie between three girls and three boys. It is the voices of her two older sisters in the other room tonight.

The soft voices that turn to giggles.

They are supposed to be asleep, but the night’s excitement has proved to be too much.

There was a time when there were always children’s voices throughout my house, but…the clock ticks forward. Quickly.

I remember a morning, over twenty years ago – when I was standing at the foot of my first two girls twin beds. I paused before waking them. Committing to my memory their small faces and hands. Admiring that beauty all mothers see in their children.

There was a part of me that would have paused the clock.

My world seemed so perfect. I did not think I could have ever been happier than I was during that time.

Life is a beautiful, fleeting thing.