There is a Lady Crying in the Harbor 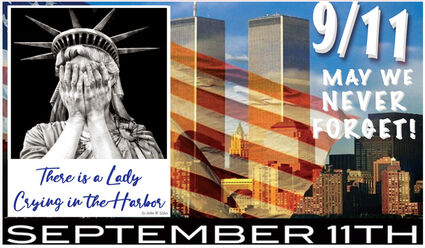 – On Friday September 14, 2001, I was awakened at 3:00 am with overwhelming grief for our nation on the heels of the September 11th attack. All I could see was the Statue of Liberty crying over her nation and was compelled to pour my heart out on paper, reflecting the pain felt by every American during this time of a national tragedy.

Her name is Liberty and she is a 22-story tower of strength overshadowing the NY Harbor, which symbolizes to the world the best in freedom and democracy, but today her tears fill the rivers of her great land. Down through the course of time she has greeted millions crossing onto her soil from abroad with a hearty welcome to the land of the free and home of the brave. Until now, her interior borders, blanketed and protected by two great oceans, have never been perpetrated by foreign missiles, but as she turns the page of a new century, those claims of freedom have been shaken. Her neighborhood in Manhattan still hemorrhages with pain, tears and suffering while an untold number of the missing members of her family lay covered in a grave of mortar and steel.

As she greeted the crisp freshness of the early fall morning of September 11th, little did she know what plans were underway to take her down. Only time will reveal the full mission of her adversaries, but her own foundation was shaken as innocent means of transportation were suddenly turned into well orchestrated and efficient lethal weapons of mass destruction; only seen before animated on movie screens. Her President found himself one minute domestically focusing on the education of our children and only moments later mysteriously swept away in the flying command center as he swiftly managed several hours of chaos. Her Commander and Chief was criss-crossing the country while these assailants of democracy attempted to destroy her financial stability and military power, all the while he artfully wove from the arrows seeking his own life, his family and the leadership team of the free world. Now, like Nehemiah, he reaches deep within his soul to rebuild the wall with one hand as he wages war with the other.

She weeps way into the night with the children whose moms and dads will not be there to kiss, embrace and tuck them in bed. She hears the echoes of wailing from spouses and loved ones globally grieving from the depths of their souls. Her heart aches from and seems un-repairable, pierced by a gulf of unanswered questions, broken cell phone calls and clear final messages left on answering machines of love and farewell.

Although her tears will forever tarnish her copper brow and cheek, this lady stills stands. She is reminded of the words penned by Francis Scott Key, “…gave proof through the night that our flag was still there.” This lady who represents all of what we call America, while noted for compassion, sympathy and grief will hardly view this as her final day.

Today her face is pointed in the wind as a flint, her shoulders are square and she is on a providential mission to seek justice, heal and to restore. She can only accomplish this insurmountable feat because this land she represents is “One Nation Under God and indivisible.” And so this great lady says goodbye to all of those who have fallen and salutes as if to signal until we meet again and is reminded one day that “God shall wipe away all tears from their eyes, and there shall be no more death, neither sorrow, nor crying, neither shall there be any more pain, for the former things are passed away.” God Bless America, stand beside her and guide her for your stabilizing hand insures she will prevail.