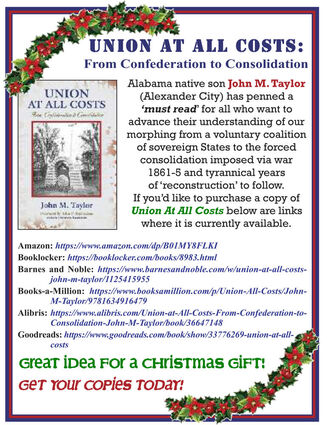 What is treason? Article III, Section 3 of the U.S. Constitution defines it: “Treason against the United States, shall consist only in levying war against them, or in adhering to their Enemies, giving them Aid and Comfort.” Using the plurals “them” and their” the text is clearly referencing the States—the sovereign entities described in the 1783 Treaty of Paris.

After Lincoln called for 75,000 troops to invade the seceded States, Virginia reversed course and decided they would not be a party to such treasonous action and they voted to secede. Virginia Rep. Alexander Boteler had warned Lincoln’s Administration that would happen if military coercion was threatened.

Lincoln, leery of Maryland joining the exodus and leaving Washington D.C. surrounded by Confederate States, claimed D.C. required immediate reinforcement. Voters in the area (Virginia, Delaware, and Maryland) generally detested the corporation-controlled, completely sectional Republican Party. Lincoln received about 2,000 of the 92,000 votes cast in Maryland, including about 1,100 of the 30,000 votes cast in Baltimore. Lincoln was also ridiculed as a coward for surreptitiously traveling through Baltimore in supposed fear of assassination. Finally, Marylanders were incensed at Lincoln’s call to invade the seceded States.

Under Article IV, Section 4 of the U.S. Constitution, a governor or legislature can request federal help. This did not apply in Maryland—troops were specifically told to stay out. On April 18, unwelcome Pennsylvania troops were taunted and harassed as they marched through Baltimore. Baltimore Mayor George Brown wrote to Lincoln: “The people are exasperated to the highest degree by the passage of troops, and the citizens are universally decided in the opinion that no more should be ordered to come…it is my solemn duty to inform you that it is not possible for more soldiers to pass through Baltimore unless they fight their way at every step.”

Ignoring Brown’s plea, the 6th Massachusetts was ordered to march through Baltimore on April 19. The cheers received over most of the 300 miles from Massachusetts (under Col. Edward F. Jones) turned to hostility. Jones warned them to prepare for a violent reception and to show restraint. Brown was present to ostensibly calm the situation, but failed miserably. Due to city law, troops had to get off the B&O Lines train and have teams of horses pull the rail cars through the middle of town down Pratt Street to Camden Station where the cars would be recoupled to a B&O engine. After leaving the train, the troops marched through an openly hostile crowd. Reaching a boiling point, gunfire was ultimately exchanged. As many as twelve civilians were killed by “federalised” troops and four soldiers were killed by civilians before the Massachusetts troops could retreat. Police Marshal George Proctor Kane and 50 of his men aided their escape. This incident is known as the Pratt Street Riot or First Blood. The actions of the 6th Massachusetts, federal occupation and post-war martial law in the South, led to the June 18, 1878 Posse Comitatus Act, prohibiting soldiers from being involved in domestic affairs.

On April 27, 1861, Lincoln issued his order to suspend the writ of habeas corpus in Maryland (helping to thwart legislators from going to Annapolis to possibly vote for secession). Per Lincoln’s orders, Butler, Winfield Scott, George Cadwalader, and Nathaniel P. Banks were told to suspend habeas corpus where resistance was met. Scott said, “In vain did Justice Taney record his protest against such suspension.” Cadwalader and Banks carried out the orders.

On May 13, Butler and his troops entered Baltimore with instructions to arrest anyone suspected of disloyalty. “Civilians who had demonstrated secessionist sympathies were arrested and taken to Fort McHenry, where they were held without charge.” Fort McHenry’s Commander, Major Morris, “suspended the Habeas Corpus privileges of those prisoners. Baltimore fell under military rule.” Butler’s troops built earthworks and placed about fifty cannons on Federal Hill, overlooking Baltimore. Encouraged by Lincoln, Butler threatened to bomb the city’s civilians if Southern sympathizers offered too much resistance.

Through 1861, Lincoln’s minions continued to arrest any Marylander suspected of being Pro-Southern. Roughly ninety-seven politicians, editors, and prominent citizens were arrested, including Francis Key Howard, grandson of Francis Scott Key, who wrote The Star Spangled Banner (partially in defiance of British mercantilism). By late autumn 1861, most opposition to the Lincoln Administration had been purged from Maryland, leaving mainly political loyalists and sycophants. The U.S. Flag was hoisted above the Customs House in Baltimore.

Invasion and occupation deprived Marylanders of government by consent, with troops from Vermont, Pennsylvania, and Massachusetts doing much of the dirty work. Approximately 25,000 Marylanders eventually fought for the Confederacy. “King Lincoln’s” tyrannical actions are prominently referenced in the State Song Maryland! My, Maryland! Of course, present-day Marxists have changed it.

References: (1) The Real Lincoln by Charles L.C. Minor; (2) Baltimore Riot of 1861, by Michael G. Williams, at History.net; (3) The Pratt Street Riot, from the National Park Service. [NOTE: I spotted a couple of typos in my August article. Massachusetts legalized slavery in 1641 and Connecticut in 1650.]