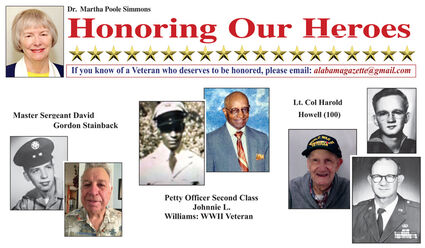 MSGT Stainback was born December 26, 1943 to his parents, Thomas and Lucy Stainback in Montgomery, AL. His father contributed to the WWII effort working as a crane operator loading war ships at Tampa, FL. After the war was over, his father worked in road construction in North Carolina until he passed away. His mother and her six children moved back to Montgomery, AL, where MSGT Stainback attended school and graduated from Lee High School in 1961.

After working at Montgomery Aviation for two years, MSGT Stainback volunteered for military service in the United States Air Force November 17, 1961. He completed Boot Camp at Lackland Air Force Base (AFB) San Antonio, TX. After taking an aptitude test, he was selected to serve in fire fighting. He trained at the fire fighting school at Lowry AFB at Greenville, MS, followed by four years of service at Little Rock AFB, AK. He was trained in fire protection, suppression rescue and jungle survival at the Air Force helicopter training school in Denver, CO. He was deployed for one year’s hazardous service in Vietnam 1965-1966 where his helicopter, the HH-43, flew air rescue in Vietnam and Cambodia for crews of downed aircraft. The aircrews for this type of aircraft saved more lives in combat than crews flying any other USAF helicopter. Several times, he was involved in crash landings after receiving ground fire.

Returning from Vietnam, MSGT Stainback served four years at Hurlbert Field (USAF) and at Holley Field (Naval Outlying Landing Field), FL. where he trained Thai and Vietnamese pilots to fly small aircraft. His next assignment was for four years at Rhein-Main Air Base, Germany, where he inspected fire prevention safety equipment at U. S embassies in Europe. He was transferred for 18 months to Minot AFB, ND, followed by transfer for one year to Camp Willingham, AK, an advanced radar warning site. MSGT was next assigned to Mountain Home AFB, ID, where he served for four years until his military retirement November 30, 1981.

After military retirement MSGT Stainback worked as a real estate broker for 26 years working with Century 21 and ReMax in Roswell, GA, and with Clardy Realty in Montgomery, AL retiring in 2005. Sgt Stainback and his wife, Barbara, were married 12 years until she passed away, and they had one child. His wife, Myra, and he have been married for 38 years, and they have 10 grandchildren, four great-grandchildren and one great-greatgrandchild. He enjoys playing the bass guitar with the Gospel Strings of Eastmont Baptist Church of Montgomery. He likes to shoot handguns and to ride his motorcycles. He is a master chef and enjoys baking, a skill that he learned while serving in a remote area of Alaska. He is a 38th Degree Mason. He and his wife spend six months of each year at the Deer Creek RV Resort at Davenport, Fl where they use his 43 ft. motor home.

MSGT Stainback states, “I would like future generations to remember that I tried to do the right thing. I believe in being honest and up front. I teach my grandchildren to be good stewards of their time and money. I feel blessed to be where I am.”

Petty Officer Second Class Johnnie L. Williams served three years in the U. S. Navy in the Asian-Pacific Theater. His Military Occupational Specialty was cook on board the USS Minneapolis, a New Orleans-class heavy cruiser, which was involved in heavy fighting in the Pacific. The ship had eight-inch calibre main guns, and the ship joined a carrier force to the Gilbert and Marshal Islands and to Guadalcanal where it protected carrier tack forces. His decorations, medals, badges, citations and campaign ribbons included: Asiatic-Pacific Medal with 12 Stars, Philippine Liberation Medal with two Stars, World War II Victory Medal and Good Conduct Medal.

Petty Officer Second Class Williams was born November 11, 1922 to his parents, Nathaniel and Emma Thorn Williams, in Montgomery, AL. He attended the Trinity Lutheran School and Loveless School, and when he returned from his military service, he received a diploma from Lowe’s Adult School.

Petty Officer Second Class Williams volunteered for military service April 28, 1942 in order to financially assist his parents in the care of his eight siblings. After Germany and Japan surrendered ending WWII, he was honorably discharged December 2, 1945.

Petty Officer Second Class Williams was married to Willie Lee Gosha 68 years before she passed away. They had four children, 10 grandchildren and six great-grandchildren. He graduated from a barbering school in 1948, worked at the Veteran’s Hospital in Montgomery, AL, and was employed by Brockway Glass Company as a furnace operator for 38 years.

Petty Officer Second Class Williams was ordained as a deacon at Montgomery’s Mount Gilliard Baptist Church. He was also a deacon at Bethel Missionary Baptist Church where he served as a volunteer with Meals on Wheels assisting with meal delivery to elderly people.

Petty Officer Second Class Williams passed away May 15, 2021 at the age of 98. People remember him as a Christian family man who worked to provide for his family and his extended family.

His conclusions about his military service are, “It made me very proud to serve my country in the military, and it provided steady pay so that I could help my parents.”

Lt. Col Howell was born January 31,1922 in Cincinnati, Ohio to his parents, Claude Edison Howell and Faye Wood Howell. He was reared in Birmingham, AL where he graduated from Phillips High School in 1940. He volunteered for military service and enlisted in the U.S. Navy in June 1942 in Birmingham, AL.

Lt. Col Howell completed his Naval Basic Training at San Diego, CA, and was assigned to the USS Wilson DD408, a Benham class destroyer, and the USS Gregory DD802, a Fletcher class destroyer. His Naval service included hazardous duty in the Pacific Theater in the Koro Islands, Guadalcanal, Savo Island, Leyte in the Philippine Islands and Okinawa. His ships were attacked by Japanese kamikaze pilots, and often his ships rescued other American Naval forces whose ships had been sunk.

After his military retirement, Lt. Col Howell joined his son’s law practice. The practice grew and is known as Howell, Sarto, Howell with the practice continuing from 1976-2009 until partners left because of health reasons. A new partner, Chris McKay, was added in 2016, and the firm became Howell, Sarto, Howell, and McKay. Lt. Col Howell worked as a professor at the University of Maryland’s extension in Japan while he was stationed there, and he also worked at Troy State University at Montgomery, AL. He retired from all employment in 2017.

Lt. Col Howell and his wife, Junetta Marion Severson, were married 57 years until she passed away. They had five children, 12 grandchildren and 24 great-grandchildren. He enjoys fishing, attending Gideon meetings, attending church services and visiting with his family members.

Seminary, President of School Board Narimasu High School in Japan and board member of Northern Burlington Country High School in New Jersey. While serving in Japan, he taught English and the Bible to Japanese college students, and he worked with Baptist missionaries teaching Bible classes on Sunday nights for three years.

Lt. Col Howell’s reflection about his military service are, “I have considered it an honor and a privilege to serve my country. I love the United States of America.” He states that he would like future generations to remember him saying, “I was a good grandpa and great-grandpa and that I loved the Lord.”