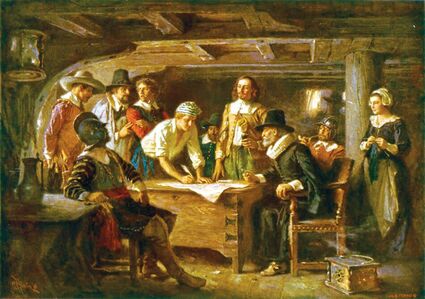 One hundred two souls left England in 1620 to land in Virginia where they were to receive land through contract by the Virginia Company. The Virginia Company was chartered by King James I to set up English colonies in Virginia. Yes, it’s the same King James that commissioned that version of the Bible. We often think of the Mayflower as a ship of Pilgrims but only forty-one were on that voyage to separate themselves from the Church of England. The others, whom the Pilgrims referred to as strangers consisted of merchants, indentured servants, craftsmen and even orphaned children. One child was born during the sixty-six day voyage, aptly named Oceanus. Two ships were to have made the journey, but it was found that one ship was not seaworthy. All people, goods, arms and animals were cramped onto the Mayflower for the journey.

Through the first winter some lived on land but many lived on the ship. That winter of 1620-1621, half of the people died which included five children. After the deaths of that winter, those deaths left the half of those remaining under eighteen years of age and some because they were now orphaned were taken in by other adults. Only four of the mothers survived, a belief that the moms did what they so often do and take care of others before themselves. Following those hardships, the others aboard the ship came to land.

But before they even got off the ship and to direct the reader to the purpose of this article, they had to have a loose set of laws to guide them. They had not landed in Virginia as under the charter and the “strangers” almost mutinied because they were outside the jurisdiction and thus not bound under the rules of their charter. The pilgrims knew that in order to survive they would have to support each other and have the rules in place before they left the ship.

In the name of God, Amen. We, whose names are underwritten, the Loyal Subjects of our dread Sovereign Lord King James, by the Grace of God, of Great Britain, France, and Ireland, King, defender of the Faith, etc.:

Having undertaken, for the Glory of God, and advancements of the Christian faith, and the honor of our King and Country, a voyage to plant the first colony in the Northern parts of Virginia; do by these presents, solemnly and mutually, in the presence of God, and one another; covenant and combine ourselves together into a civil body politic; for our better ordering, and preservation and furtherance of the ends aforesaid; and by virtue hereof to enact, constitute, and frame, such just and equal laws, ordinances, acts, constitutions, and offices, from time to time, as shall be thought most meet and convenient for the general good of the colony; unto which we promise all due submission and obedience.

In witness whereof we have hereunto subscribed our names at Cape Cod the 11th of November, in the year of the reign of our Sovereign Lord King James, of England, France, and Ireland, the eighteenth, and of Scotland the fifty-fourth, 1620.

Those first laws that were temporary to guide people in the new world have obviously evolved from a set of guidelines to laws that govern every aspect of our lives, taking on thousands of volumes of books for the Federal government and its fifty states. A very slim government has grown to have many elected individuals for various positions and a huge bureaucracy developed to support them.

In March, a native American, Squanto (otherwise known as Tisquantum) greeted them using the English language. Squanto had been taken as a slave by an English sea captain years before and taken by monks in Spain where he was educated. He made his way to England and through a series of events back to the New World only to find that his tribe had died out from disease probably brought by the English.

April 1621 was met with the election of John Carver as its governor. After Carver’s death, William Bradford was elected governor and he proclaimed the biggest reason that November, 1621 is remembered. That being a three-day celebration held in thanksgiving for those that had survived that first winter. That celebration was with the help of the local indigenous people who through the connection with Squanto had helped those at Plymouth to learn how to be self-sufficient and to survive.

Thanksgiving celebrations were intermittently held thereafter throughout our history, with a later declaration by Abraham Lincoln. President Franklin Roosevelt later changed the Thursday to hopefully spur the economy during the Depression but was changed back to it’s more historical third Thursday in November.

I hope that each of you will think on your blessings and give God thanks and hopefully be able to enjoy an abundancy of family with you.