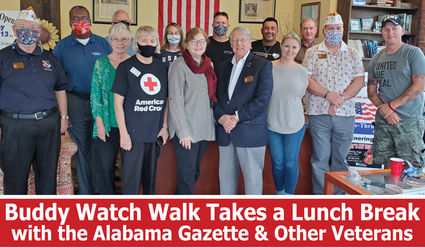 Participants in the Buddy Watch Walk, a portion of which was held in Montgomery, AL, October 29, gathered for a luncheon and program at the offices of the Alabama Gazette on the afternoon of Wednesday, October 28. Sam Adams, co-owner of the Gazette, and the staff opened the office doors with light lunch consisting of Chick-Fil-A and Chappy’s Deli. This was a simple way to honor what this amazing group is doing for Veterans and other Americans facing situations such as domestic violence, breast cancer, and the like.

Buddy Watch Walk began as one man’s passion to bring awareness to the issues that veterans face every day that can ultimately lead them to giving up. It has now become the mission of four men: John Ring, Jimmy Mathews, Jason Hanner, and Paco Baltazar, all of whom joined at different stages of the walk begun by Ring in November 2019. They are working to bridge the gap between the civilian and military worlds and raise awareness of veteran issues such as mental health, Post Traumatic Stress Disorder (PTSD), homelessness, unemployment, Military Sexual Trauma (MST), Traumatic Brain Injury (TBI), addiction, and suicide. Veterans need to know that they have not been forgotten.

Buddy Watch Walk East kicked off on the first anniversary of Buddy Watch Walk – Pier to Pier, October 1, 2020, at the War Memorial Building in Jackson, Mississippi. In October 2019, John began the walk and was soon joined by Jimmy in Pearl, Miss., Jason in El Paso, TX, Eli Hawkins in Tucson, AZ, and Paco in Phoenix, AZ. The group of service members and Veterans walked nearly 2,500 miles from Tybee Island, GA, to Santa Monica Pier, CA, ending their first journey on July 14, 2020.

On October 1, 2020, John, Jimmy, Jason, and Paco headed east from Pearl, MS, back to Tybee Island, GA. This walk is 601 miles, and they plan to arrive on December 3. Jimmy Mathews has committed to complete the entire trek across the United States since joining John on the original walk partway through the journey.

On March 25, 2022, they’re planning a walk from Normandy, France to Berlin, Germany for our WWII Veterans. More information can be found at the website: https://ww.buddywatchwalk.com.

We appreciate the sacrifices this group is making for our Veterans!