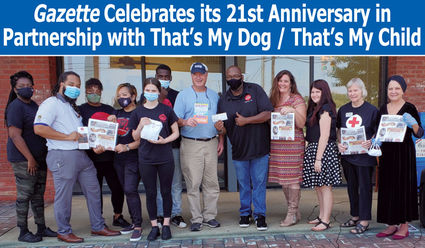 Alabama Gazette Publishing celebrated its 21st Anniversary on Tuesday, October 13, 2020. Loretta Grant founded the newspaper in 2000 as the “People’s Paper.” It is dedicated to God, Family and Country, and stands in the gap where other print media shies away from telling it like it is. Unfortunately, due to a family illness, Mrs. Grant was unable to attend this year’s celebration of the newspaper she truly loves.

The Coronavirus has forced us to find a new normal when it comes to large gatherings. It was no different for this anniversary, as the standard Open House became a drive-through with the help of That’s My Dog under the leadership of Charles Lee, its founder. During lunch, staff of the Gazette and That’s My Dog distributed more than 100 sack lunches to anyone who drove by or walked up, and staff also carried lunches to local businesses and first responders. Any remaining sack lunches were donated to MACOA.

This day was only made possible by the Alabama Gazette’s partnership with That’s My Dog, a local nonprofit organization supporting the teens of this city through its program, That’s My Child. That’s My Dog provided the hotdogs and condiments, while the Alabama Gazette provided the drinks and moon pies. Charles Lee set up a loudspeaker and music to draw attention to the day’s festivities. The day was beautiful and the weather cooperated in these joint efforts.

At the end of the afternoon, Sam Adams, co-owner of the Alabama Gazette, presented That’s My Child with a check for $1,000, in support of all the work Mr. Lee and his staff continued to do for the youth of this city. We appreciate the sacrifices this group is making for our Veterans!